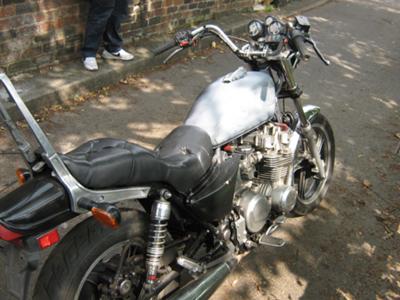 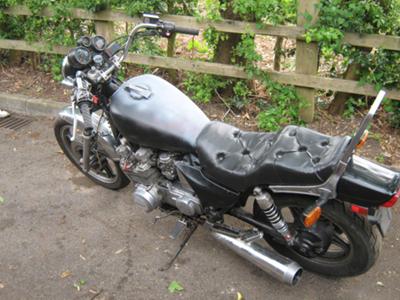 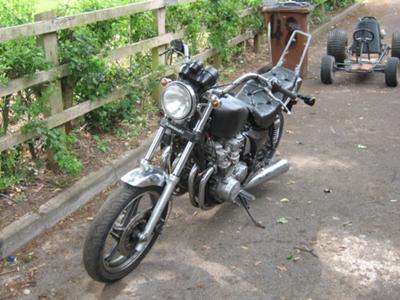 1984 Kawasaki ZN700 Chopper (GB/UK) rebuild and custom on budget... Got my bike from a swap website, previous owner said and advertised very good runner etc etc., just needs TLC and on road again. So I decided to swap a 1991 Kawasaki EN500 for it (wanted more power). It looked like the ideal project on pics on site. I as soon in for a shock in real life. Got there to the guys house the bike started up ok then few minutes stopped (the guy said it just needs carbs sorting). so papers and keys exchanged. At home a few days later sorted carbs (needs a good clean). Then disaster the engine ran pinking and hardly any power (pedal bike would off thrashed my ass on drag strip lol). And lots off white smoke smell of fuel, and blue smoke out off engine as t it got warm (at that moment I thought oh f^&k what have i done. So the engine and bike was stripped down to its bare bones. The frame, swingarm and foot rests where sent to shot blaster and powder coat in high shine gloss black. The tank which needed fitting proper was of a Honda cx500, side panels and rear fender was sent to my mate who is a painter to be stripped and primed and painted in gloss black. Most of the chrome just needed a few hours polishing and buffing. The electrics I had to pull apart as there was loads of electrical issues, the engine was stripped down to

its bare engine casings.then came the hard part try to find parts and gaskets in the UK to this bike. Not a chance in hell, so on the internet eBay for full gasket from the USA,new shells and other bits from Kawasaki (wont to bad ) but getting the measurement to these shells wasn't easy as the marking and colors off the shells had worn away. Then rebuilt engine in a course of a 1 1/2 weeks. Carbs I decided to but recon kits off wemoto. Carbs done (floats at wrong height ). The exhaust was welded buy a friend off mine. The wheels have been sprayed satin black as I like this type off look and looking into having the tank air brushed on. Re-did the wiring my self (no books or manuals spent 5 years working as auto electrician). New switch gear off a Yamaha xj600 resprayed and cleaned to a satin black. The original clocks didn't work so I put a single clock with lights built in. Dismantled and thoroughly cleaned and new seals on the front and rear calipers. Braided hose made its way to the front caliper. New throttle cable, original was sticking. The clutch cable looked recent so left it on. Waiting on some levers (billet with skulls on the end). Not so sure to hard tail it of soft tail it yet ? Head lamp replaced with one off a cb400. Going to have seat recovered as it worn. And the sissy bars pad made and done same as the seat.