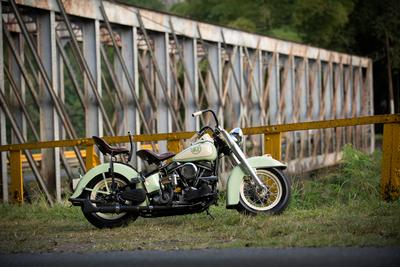 The Panhead engine was the second Harley Davidson overhead valve engine introduced to the market.

First marketed in 1948, it continued to be the Harley powerhouse until it was replaced with the slightly refined Shovelhead in 1965.

The "pan" replaced the knucklehead Harley had used since 1936. It's quieter, yet throaty sound quickly became popular.

Note: The motorcycle shown above is a 1951 Panhead, 'With some Puerto Rican spice', according to William Morales who is from Morovis Puerto Rico and is on our newsletter list.

Just as the knucklehead and later the Shovelhead were named for the shape of their rocker plate covers, those on the top of the cylinder heads of the Panhead looked much like large flat pans.

It didn't introduce much significant change from the knucklehead. The major changes were the aluminum heads and the quieter, more efficient lower end.

Also, the change to hydraulic valve lifters took up any slack in the valve train automatically and relieved the need for continual valve adjustment. This contributed to reduced engine noise and engine maintenance. 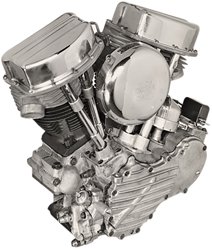 The impetus behind the development the Harley Davidson 'Pan' was the company's desire to resolve oil leak issues which were being experienced on knuckleheads.

The knucklehead had made the total loss oil system a thing of the past by introducing a recirculating oil system, but there continued to be oil leaks on the knucklehead.

The solution was to place the external oil lines inside the engine casing and the oil pump was upgraded to better regulate oil pressure. The new aluminum heads offered cooler engine performance.

Some minor oil pressure problems persisted even with these improvements on early "pan's", but this was cured by the factory on the later models.

The Hydra-Glide was a panhead engine mounted into a Harley frame with hydraulic forks replacing the former Springer-style forks. This model was later the basis for the Electro-Glide which housed the shovelhead engine.

It can be a challenge to tell the differences between frames which were manufactured to house a pan versus knucklehead engines. While some differences are majors, only a few are easy to spot.

If you have a 'pan' engine and are seeking a frame built for that engine, you should be aware of these differences since it can be very hard to fit it into a shovelhead frame. On the other hand, placing a shovelhead into a pan head frame is not nearly challenging.

One of the keys to identifying frame models is the fact that the knucklehead frames have down tubes that are straight while the rigid "pan's" have down tubes which are visibly slightly bowlegged.

To make things even more challenging, the early 1948, late 1956 and the 1957 Panhead frames also had down tubes that were straight.

One these models, check for the triangular top motor mount on the pan head frame. 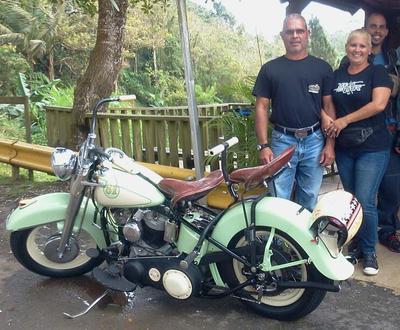 The 'Pan' above is another shot of the 1951 Harley that was customized by our subscriber William Morales (his bike is also shown above).

Upload A Picture Of Your Panhead And Describe It!

Click below to see bikes from visitors to this page...

My 1948 Soft Tail Panhead! Not rated yet
I got this bike from my dad after my 2nd & last intoxicated motorcycle accident. I have decided to stray away from the rigid frame & I scored this soft-tail …

1955 Harley Davidson Panhead Not rated yet
Hi I have a 1955 Panhead and it has been sitting for over 10 years. My uncle was working on it back then and was in the process of re-wiring it and placing …