A Little Info On Honda Choppers!

Enthusiasts of Honda choppers claim that the best Honda motorcycle is the 1985 Honda 250 and the more recent Honda Rebel. Apparently the Honda Rebel is a smaller clone of the 1985 Honda 250, which is the bike that many Gen Xers first learned to ride on while in high school. The CB750 series seems to be a very popular line for bike builders to customize as well (see this article for more on honda choppers)...

For this reason alone, Honda's have great sentimental value for collectors of motorcycles. The Honda's boast the usual features identified with traditional old school choppers including an air-cooled twin V-engine and engine cylinders that are each fed by two valves.

Both the elderly model and the brand new model boast a bulletproof engine and tire casings and 40's look retro styling. An extension of the two front forks is all you really need to make this moderate looking chopper into a more extreme looking ride.

The Rebel is probably the more accessible of the two bikes. It features low compression and carburetion that is provided by a single 26mm unit. Mufflers flank either side of the bike and the chain drive is powered by a five-speed transmission.

This chopper is also more efficient than the antique Rebel. It gets about 170 miles per filling of it's 2.6 gallon tank. A double-cradled frame that also boasts a 33mm fork supports the engine. The fork is attached to an 18-inch front wheel. The wheels are maneuvered by a very wide, pull back handlebar that sports a single instrumentation gauge.

The Rebel Honda chopper also boasts one of the lower seats in the industry eliminating the need for altering the frame in any way if you decide to customize it into a meaner looking chopper.

The rear end of the Honda Rebel chopper rolls on a 15-inch spoked wheel. Although both the Rebel and the 250 are almost considered to be nerdish by some chopper expert's standards they are easily souped up with customizations.

The 2003 Honda Rebel chopper was released in a pearl and blue color scheme that some found to be too fake retro and that others thought was perfect to achieve the mod look of a new school chopper.

Both the Rebel and 250 choppers have been criticized for their lack of little details. There is no oil indicator light, no tach and a dim halogen headlight. Of course another Honda or Honda look-alike beam can easily replace the halogen headlight by shopping at sources that specialize in aftermarket goods. Another drawback is that tall people simply cannot ride a Honda chop because of its low seat and short height.

Many describe Honda choppers as mini choppers as every single component on these bikes seems to be miniaturized to some extent, except for the handlebars, which are standard in size.

They are also not meant for heavy individuals, as they tend to lose power once they have to carry any weight.

Honda choppers may have been built smaller simply because the company realized it was creating a bike for enthusiasts and beginners. On the other hand, Honda's have lightweight frames that allow for easy manipulation on the road. 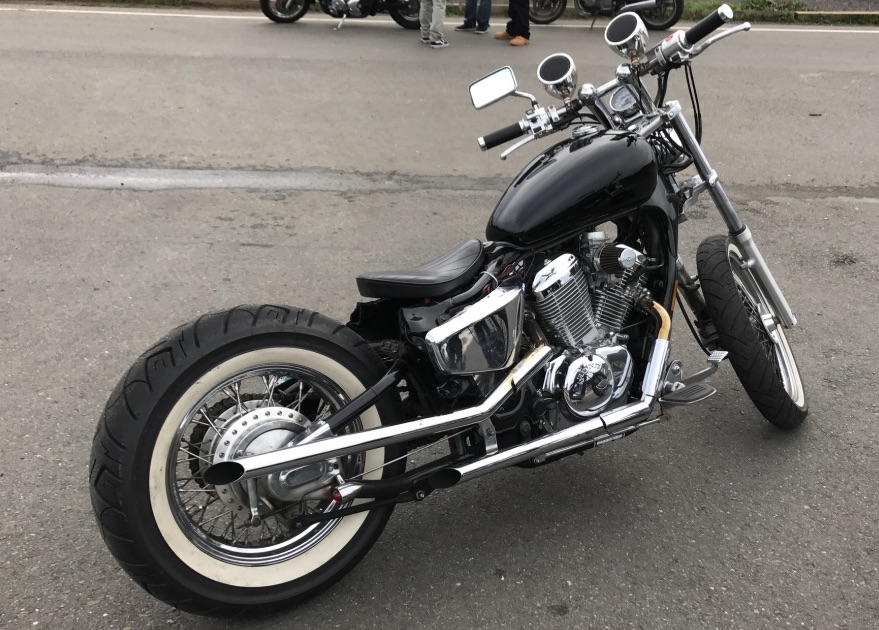 This Honda bobber was chopped and customized by a cool guy I met at Cronkite beach. Nice work bro.

The lower seat also benefits nervous first time drivers who may feel the need to have their feet touch the ground to steady the chopper.

Still Honda choppers are ideal for the beginner rider or custom builder who needs a smaller inexpensive bike to experiment with both in terms of exploring the road and the vehicle's potential to become a customized chopper.

Upload A Picture Of Your Honda Chopper or Bobber

This is the last of a sequence of 4 different looks for this bike. I've cut most of it up, so there's no turning back. It still retains most of its comfort …

This is a Custom Honda CB750 built by my shop in Waverly Ky After Hours Cycles.

I bought this bike 2 years ago in original condition. I've done a few customizations to make it a softail chopper. Shall we enjoy the pics! Baddshadow

A Cross Between Nastalgia and Pro Street

A friend I met a while ago had an old school Honda 750 chop with the old a.e.e. frame, and painted in the old hippie style, and was going to sell it to …

This chopper started life as an Honda MT250 Elsinore Enduro. It ended up like this. Piles of used parts, tapered bearing, cb neck on mt tree's, hand hammered …

I've loved this 1981 Honda CB750 bike for a long time. It was my father-in-law's bike until he handed it down to me. It had a horrible paint job, seat …

First pictures is a 1975 Honda CB 550 I'm building for my father, in the beginning stages. Second pictures is the completed CB 550 Bobber. It's …

I had my motorcycle driving license since 1960 so I am rather old. But I have not practiced all the time. I grew up 50 m from a famous road-racing road, …

Cave Built Hard Tail Frame Not rated yet
Hi friends its long time since I have started my second bike I learned a lot from cusotm-choppers-guide.com. They are my hero and real teachers. I learned …

Honda 400 CM Hot Rod Not rated yet
Just an old Honda 400 CM custom hot rod where I made a new two piece seat from the stock seat that I remodeled and made new covers for myself. The 2-1 …

Honda Four CB 750 Not rated yet
Hi guys I’m from Mexico and I have a Honda cb750 Four from the 70's. It has an air front suspension I’m thinking about put or adapt an air compressor …