Indian Motorcycles Rolls Through The Trends...

The owner of Indian Motorcycles had a vision. A dream to create a motorized bicycle, as they called it in the days of the past, with the intent of providing  transportation for the public to get around more efficiently.

Indian has been around since the beginning of the 20th century. In 1901 Indian built their first motorcycle and in 1904 they were the only motorcycle company to win the gold metal of excellence. At that time it was quite a feat to win this award.

In 1953 Indian Motorcycles had to halt production due to low sales. It would not be until 1999 when Indian's were back on the market and even then it would take some legal work to get them there.

Indian then merged with the American Indian Motorcycle Company, the California Motorcycle Company, and six other companies to form the second largest producers of heavy cruisers in North America. Indian started building a limited edition motorcycle that year that is worth quite a lot of money today. 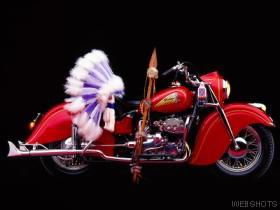 Even if you are not a huge fan of Indian's you must know that they have revolutionized some products that are important in the biking community. Indian introduced the largest OEM motorcycle engine that was both designed and built in America to date. Indian's that are made to the highest of standards.

Why They Maintain Quality And Value Through All The Trends...

Indian's a new brand of integrity in the business world. Indian Motorcycles are driven, and their personal performance is then critiqued by experienced riders before delivering your bike to you, to make sure you get the most out of your Indian...

If you are not satisfied with the report they give you, then you know, exactly what you may or may not be getting. This will allow you to make a much more informed decision when choosing your very own Indian.

UPDATE: Indian went belly-up. Now they are back. Several years back they went out of business and a liquidator was starting selling off all their equipment, and their factory is was for sale (out of Gilroy). Pretty sad. But now Indian' are back!.

By the way, our quality newsletter Mini Course is loaded with custom chopper suggestions, pictures, special deals, and much more. Click here to sign up for it now. It's free and you will look forward to every issue.