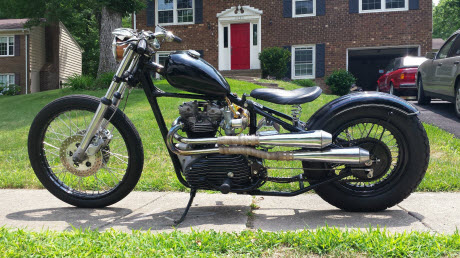 Triumph choppers are some of the classiest, old school type choppers you'll find. Harley Davidson has captured the hearts and minds of the world, but Triumph is a killer brand, and they don't get enough recognition in the chopper world.

Evil Knievel was being interviewed a while back and he said that his Harley would never hit the ramp straight and it would swerve at high speeds. But his Triumph was always "straight as an arrow".

He stayed with Harley Davidson because Triumph didn't have a sponsorship package...according to him. Evil knows a bit more about bikes, so I'll listen to his advice.

Maybe you should consider getting an old 60's or 70's Triumph and customize it? 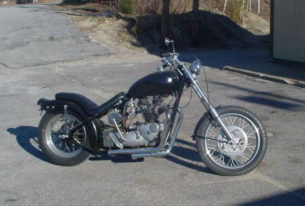 Is Triumph As Famous As Harley Davidson?

Triumph choppers are as old and as famous as Harley Davidson choppers, except that these sleek machines are more favored in Europe than they are in the United States. Most choppers are custom built to mimic the look of the Triumph motorcycle's models from the 50's and 60's. This is the kind of chopper that rebels and loners such as Steve McQueen, Marlon Brando and Clint Eastwood rode in movies of the same era.

Today Triumph is still the pride and joy of the British motorcycle industry. Their main production facilities are located in Hinkckley in Leicester England. The Triumph name dates back to 1885 when the founder of Triumph, Siegfried Bettman started adding motors to bicycles.

With the invention of the combustion engine in 1902, he produced the first powered two wheelers. Since then this company has produced many kinds of models including the very famous Bonneville, Thunderbird and Tiger series of bikes.

To mimic the bold yet laid-back style of the Triumph, custom chopper builders will want to look for a frame that resembles a classic cruiser. This means that the seat is low-slung and features long forks for the wheels.

Another identifying characteristic of true Triumph chopper is a transmission that is separate from the engine.

Triumph choppers usually had a 360 degree crankshaft (this is where the pistons rise and fall together.)

So if you buy a bike and chop it up, you can be sure there are parts around to build a Triumph chopper. The classic Triumph transmission is four speeds. A rare option is a transmission called the "slick shifter".

This transmission was designed for racing and allowed shifting without having to pull in the clutch. The unit transmissions that were designed for Triumph choppers were four speed models until about 1972, when Triumph began manufacturing a five-speed transmission.

If you are building a bike one customization you might want to consider is swapping the four-speed transmission for the newer five-speed edition.

The bikes, motorcycle parts and motorcycle accessories that Triumph produces are widely imitated by companies who produce clones for sale in what is called the aftermarket. Reproductions of genuine Triumph parts or parts that have a similar styling can be purchased in the aftermarket so that you can build an inexpensive chopper that looks just like the real thing.

Here are the features of this killer ride:

Triumph parts are not hard to source so everything you need to customize your bike including custom fitted leather saddlebags, sissy bars, and the signature classic Triumph chassis trim should not be hard to find with a little effort.

Drawing inspiration from the past, Triumph motorcycles are classic machines that offer a rare combination of traditional styling and a kick ass attitude that is admired by custom built chopper enthusiasts all over the world.

Upload A Picture Of Your Triumph Chopper or Bobber

I bought a stock 750 Bonneville a couple of years ago as a project bike. I wanted to build a raw looking chopper for bar hopping around town. Actually …

Well its been a few years of on and off progress on my 1970 Triumph Chopper TR6C project . The bike is now wired and the rear brake is finished, sissy …

A couple of years ago I bought a bike in a box. A 1962 Triumph 5ta Chopper with a broken engine. I really enjoyed restoring this bike. I ended up selling …

1969 Bonneville Part 2: Holding down a regular job with w/e work also, progress is slow but moving forward. Sent the completed fuel tank to the best painter …

1969 Triumph Bonneville: It came to me as a 1969 Trophy in a busted up frame and nothing mechanically operating. 650 Bonny Heads and 40 over with a complete …

Triumph Bonneville chopper T120R 1971P Home Made as a project with my boy! Canada

Well My name is Paul and I've been riding for a short time and ride a 2001 Indian scout now but my real love is for a good old rattle the bolts loose triumph. …

I picked up a 1969 triumph basket case. I am mechanically CHALLENGED!! But anyway I'm going to give it a try, lol. I do know I can take parts to chrome, …

I started this Triumph Rat Chopper vision with a rigid frame for a Yamaha XS 650 frame, A 1972 T120r 650 motor and a very understanding wife. Needless …

I was looking for a project bike for this winter and found a 1968 Triumph chopper that had caught fire some years ago. So I picked it up cheep its not …

1973 Triumph 650 Tiger Not rated yet
From Sydney, Australia: This is my 1973 Triumph Tiger with hardtailed OIF frame. It was my daily rider for about a year before I had the hard tail welded …

1969 Bonneville Chopper Not rated yet
This is my 1969 Bonneville with a single carb on it. I'm just waiting for the tank to get out of paint. It's a 3.2 gallon sporty king tank. I just need …