About The V-Twin Engine

If you are into chopper's then you are probably familiar with the v-twin engine.

Do you know this type of engine is named a a V--Twin? It is a two-cylinder engine layout in which the cylinders form a "V". The engine's pistons are aligned so that, if viewed along the line of the crankshaft, they appear to be in a V. 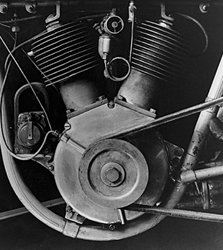 The v-twin engine can be mounted in the transversal position (the definition of 'transversal' is a line extending or lying across at right angles to the long axis.) V twins on Harley Davidson  Motorcycles are mounted in a parallel position. The longitudinal V Twin (the definition of longitudinal is: length-ways, lengthwise) as seen on Moto-Guzzis and some Hondas is less common. This position is well adapted to its transmission shafting, but has the disadvantage of causing a torque reaction that tends to lean the motorcycle on the side. The first VTwin was introduced in 1903, updated with two and three-speed gearboxes.

The Indian was one of the first US makers to offer a successful Twin in 1907.

The most obvious configuration for a Twin is a 90° angle, but other angles can be achieved like the 45° Harley-Davidson.

A normal two cylinder engine fires the pistons in such a way that one fires on the first revolution of the crankshaft, and the second one first on the second revolution.

The engines runs quite smooth under this design.

But a Harley engine has two pistons, and the crankshaft has only one pin (in the design above, which is a common design, there are two crank pins for the connecting rods which the pistons connect to), and both pistons are connected to it.

So the pistons fire almost at the same time. Whereas in the example above they fire at different intervals.

This gives the choppers, and most particularly the Harley Davidson its unique sound, throaty, in your gut...you know what I mean...

This vtwin motorcycle is one of the early versions at 90 degrees...

As you probably know, the first choppers to come out with this engine were the Harleys, so we can easily say that the vtwin engine was born in the Harley Davidson's factories.

The Harley V Twin is generally credited to Bill Harley, who designed it in 1908 as H-D's Chief Engineer. He went to work on the design right after graduating from the University of Wisconsin in 1908. Those first Harley V-twin engines proved to be a failure. In 1910, the (V)twin engine dropped from Harley Davidson's line.

But it was soon re-designed and appeared again in 1911.

(V)twin's are not just for Harley's and Indian's. Many manufacturers use the configuration on their bikes: Suzuki, Kawasaki, Yamaha, Honda...all have V-twins.

To learn more about panhead engines and v-twin engines and other different types of engines, bookmark this page because we will be adding more articles shortly.

And here is more information on v twin chopper kits.