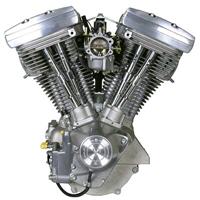 The Harley Evo engine, also known as the Evolution and Blockhead engine, has been made by Harley Davidson since 1984.

The Evolution engine is a 45 degree, V-twin motorcycle engine that is cooled by air.

The Evolution engine was first used in the 1340cc Big Twin bikes in place of the Shovelhead engine. Then in 1999 it was replaced by the Twin Cam 88s.

It was used in the 1100cc Sportster. It is currently used in the 883cc and has been in the 1200cc since 1986, when it replaced the Sportsters Ironhead engine.

Analyst attribute the Evo engine for saving Harley-Davidson from certain bankruptcy. The name Evolution is attributed to the reformed image the company created in 1981 after the employees lead a buy back of the company from AMF.

The Evo engine gets its the name of Blockhead because Harley-Davidson engines get their nickname from their shape and the Evolution engine has a distinct rectangular shape.

The Evo engine was a major advance in engine design for the Harley-Davidson company. It is set apart from earlier engines because it was designed to be more reliable, use less oil, and require less maintenance, making it the perfect engine for those less experience in mechanics.

The Evo engine runs more smoothly for tens of thousands of miles farther than any engine before it and under many different circumstances. The Evolutions twin heads are made of aluminum, instead of the iron that was used in engines before. 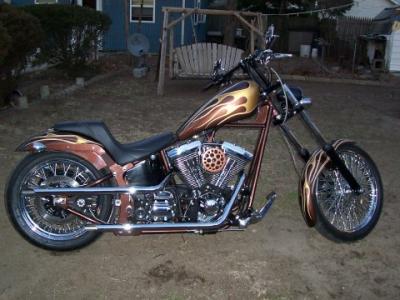 This makes the over all weight of the bike less as well as improves the efficiency of the air cooling. The engine avoids the problems that occur when the heads and cylinder are made from different materials.

Also, in engines that use water, the oil and water will mix causing lubrication failure and ultimately the destruction of the engine. The essential parts of the Evolution engine that make it superior, the blocky rocker boxes as well as the head and cylinders, are all made from aluminum.

The Sportster's quasi-unit construction has been part of the extremely popular model since it was first constructed and was kept when the engine was upgraded to the Evolution engine in 1986. The result was a unique configuration of the valve train.

Unlike most of the other motorcycles engines being used, the Evolution engine in the Sportster has just one cam for each engine overhead valve. This means there are four individual camshafts, that are single lobe and gear driven.

This caused the cam lobes to be located behind each other, and for the pushrods to now be positioned in a parallel fashion. Each lifter and pushrod is then allowed to deflect off the cam lobes in a perpendicular movement to the lobe plane. The Evolution engine in the Sportster went virtually unchanged until 2006 when some changes were made to the final drive, motor mounts and transmission.

The design is almost identical from the 883cc to the 1200cc models, except for the bore is much smaller in the 883cc and the head is slightly different. It is easy to convert from and 883cc to a 1200cc, which is often done. Until 2007 the Evo engine on all Sportster models were made with a carburetor. However, they now come standard with fuel injected Evolution engines.