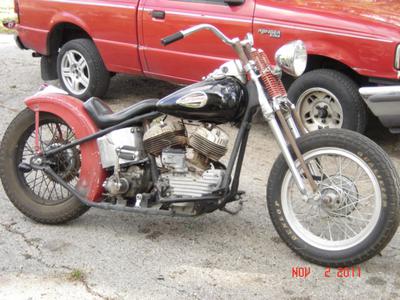 The flathead engine, also called a side-valve engine, are engines that uses internal combustion with valves located inside the engine block and beside the piston, rather that in the head of the cylinder like in the overhead valve engine. The design was used mostly in early designs for engines, but has slowed in use recently. Usually the valves of the Flathead are located on one side of the cylinder.

On the underside of the head of the flathead engine is a recessed chamber that allows the poppet valves to rise from their seats alternately to allow the mixture of fuel and to let the gases from the exhaust escape the combustion chamber. There are many advantages to this process, including the cylinder head being less expensive and being less complex than the mechanism inside the head on an overhead engine. The head of a Flathead  is usually made up of just one solid piece of metal.

Additionally, the valve is allowed to operate when it is pushed directly up on, like in the valve-in-head engine. Also, it is slightly easier to cool the Flathead engine because the valves are not in the way of the cylinder so the jacket for cooling is easier to constructs. The Flathead does have its disadvantages. One is that the airflow must make a minimum of a 90 degree turn to get into the cylinder causing it to not be as efficient. This higher level of efficiency was not needed when the engines were first developed because they were not required to go for long distances at high rates of speed.

Flathead engines saw great advancement in the 1920s when Sir Harry Ricardo from Great Britain improved them by intently studying their air flow. In 1927 he published his findings and claimed a patent on the Ricardo Head which has the exhaust valve farther from the cylinder's center. He also gave the form of the intake and exhaust tracts made into the cylinder block special attention, in regards to the turbulence they caused in the intake stream and combustion chamber.

The exhaust in the Flathead engine had more serious concerns because the design made it more difficult for exhaust to escape the engine, causing problem with over heating. The solution was a T-Head or T-block that had a side valve engine layout with the exhaust being released through an exhaust and valve tract on the cylinder's opposite side from the intake valve. This type of engine was used in the 1920s by the Cleveland Motorcycle Company on their four cylindered in-line bikes and continued until the 1950s. 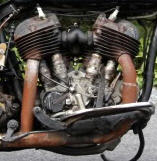 Harley Davidson began to use the Flathead in their Sportster Model they made from 1919 to 1923. They continued to be used in the exported models that were 340cc and 500cc as well as in the three wheeled "Servi-Cars" until 1973. From 1952-1956 they produced the K series to compete with the sporting motorcycles coming out of Britain. Bikes with 750cc side-valves were allowed to compete with bike that had 500cc over-head valve engine. They replaced the K series on the retail market in 1957 with the Sportster but the racing 750cc version of the K model was still being made in limited numbers for road and track racing events until 1969. It was at this time that the rules changed and Flathead engines were no longer allowed to race.