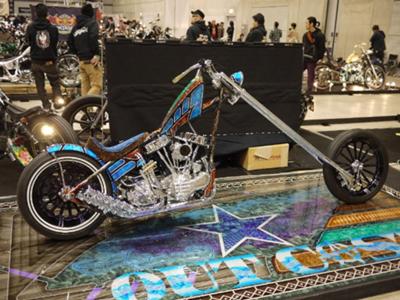 Japan has always been a potent power in the field of technology. In the motorcycle industry this small but highly advanced nation has brought dynamic changes.

They have brought so much change that they when one thinks of choppers the names of companies like Honda, Yamaha, Kawasaki and Suzuki soon arises.

It should not, however, be forgotten that although these big companies played a significant role in bringing Japanese choppers to the center-stage, there are many small and not so renowned chopper companies whose contribution in the field of chopper making cannot be denied.

Frankly, many chopper lover's cringe at the thought of owning a Japanese chopper. But the colorful history of Japanese chopper is fascinating indeed. And the real truth is that the best motorcycle for you is the one you feel comfortable with and enjoy. So whether it's a custom or a stock motorcycle, get what feels right, and don't worry about what other people think. After all, the chopper resulted from the surge in individuality, freedom, and outright rebellion. Conformity is exactly what owning a chopper is NOT about...

The brand name that chopper lovers are very familiar with is Honda. This Japanese chopper manufacturing company has produced some of the more popular, and reliable factory production choppers in the recent past.

The vintage 1985 model called the Honda 250 (man I feel old after saying that) and the more recent Honda Rebel are the two models that many Japanese chopper enthusiasts simply love to ride (and chop).

The two models are very user friendly and some collectors are fanatical about them. This is perhaps the reason for its popularity among the beginners.

The Honda Rebel has low compression and carburetion. Its chain drive is powered by five-speed transmission. It scores high on efficiency. And with a tank of 2.6 gallons it can cover 170 miles.

The chopper is controlled by a very wide pull back handlebar that helps maneuvering. Lower seat position eliminates the need for further customization.

Honda choppers are sometimes called mini choppers because of their lack of height making it difficult for tall people to ride them.

These choppers generally sport a pearl and blue color and is favored by some and criticized by others.

While some chopper experts point out the apathy of Honda to the lack of detail, buyers lap up these choppers after customization. The light frame and powerful engine help the rider to manipulate through heavy traffic quite easily.

The 10th anniversary of Cobra annual radical custom motorcycle turned out to be a remarkable exhibition of choppers that were bewildering in terms of design and performance. The outrageous looking choppers combined the very best in terms of technology and innovation.

The traditionally impressive Japanese choppers stole the show and the elegance and radical customization of Kawasaki Vulcan 2000 proved to be an irresistible attraction. Its jaw dropping design mesmerized everybody. Popularly called the 'Mad Kaw' this huge custom-made chopper of Kawasaki is powered by big V-twin engine that is highlighted beautifully by the manufacturer.

The twin-engine pack a massive power of 2000cc. The chopper is a super-sized variety and sport a 240mm rear tire. The first and foremost attraction of the chopper is the huge engine. While some parts are polished and chromed to enhance the elemental shape, other parts are painted black. This chopper can be further personalized by fabricating many of the additional parts on the motorcycle.

The under seat "body work" that shrouds the radiator can be redesigned according to your choice.

Japanese choppers (some people even refer to them as Jap choppers) have become a leading player in the industry because of its involvement with racing and different types of motor sport. Foreign market too is helping the growth of Japanese choppers.