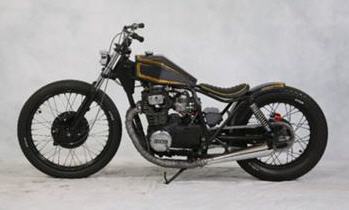 Like many choppers, the Yamaha XS 400 offers a unique riding experience. First produced in 1977 Yamaha had a different kind of rider in mind when they designed this unique bike.  The overall design was introduced with good intentions. Powered by the "Parallel Twin" offered in both two, and four strokes this little warrior was perfect for the daily commuter.

Weighing in at only 400lbs the Yamaha XS 400 was perfect for the inexperienced rider. It offered the same advantages of having a motorcycle at an affordable cost, but the rider did not have to worry about too much power. The XS 400 was released to the streets in 1977 where it's V-twin produced a whopping 27 HP at 7000 RMP.  With a competitive 9.2:1 compression the 400 allowed its riders to scream down the highway in excess of 100mph.

The newly innovated XS 400 machine was impressive to the motorcycle enthusiasts of its time, but in did not come without is drawbacks. The overall performance of the 400 was not as efficient as many originally expected.   The early models experienced many problems including fuel leaks, electrical problems, starter problems, and many were ready to throw in the towel at just around 20,000 miles.

Fortunately Yamaha was able to gain control over the 400s numerous problems, and in 1987 was finally able to regain some ground. It was during this year that they released a newly innovated exhaust system for the XS400. Successfully improving its power and reliability Yamaha continued its production until the 400 was eventually replaced by the modern day 250. 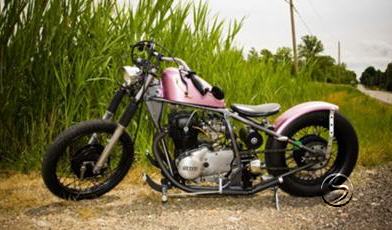 Today the XS 400 is merely a distant memory for some. With the continued innovation and improvement of modern motorcycles. The 400 just could not keep up with the changing times.  Although the 400 is not currently produced they still can be found few, far, and in between. Many motorcycle enthusiasts keep their old 400 for classics collectibles. With many replacement parts on the market the 400 can still be maintained in running condition.

In the 90s the 400's were used by many motorcycle training facilities. They offered the new rider a chance to experience a mid-size bike without taking on the dangers of larger heavier motorcycles. Its light weight, and decent maneuverability made it a perfect match for the future motorcycle enthusiasts.

Sadly, once again the 400 was out performed by the modern day 250s growing popularity. With its newly innovated technology the 250 was lighter, faster, and more efficient.  Today many motorcycle training schools use all different types of motorcycle trainers. More commonly seen is the modern 250. It offers more to the rider than the 400 could ever have hoped for.

One thing can be said with certainty. The XS400s do not get the proper amount of credit they deserve these days. In their prime they were evolutionary machines. Sadly with the changing times, and advances in technology we were not able to see the XS400 continue its rain of power over the motorcycle industry. However, what was once famous has not completely been forgotten.

Many of today's modern motorcycles continue the legacy that began with the 1977 XS 400. The body styles and marketing strategies used in the late 70s are still being seen in the bikes of the 21st century. Whether intended or not. The XS400 has left a lasting impression on the motorcycle world .It's this image that will continue to be seen well into the future.