How To Build A Cheap Chopper

To build a cheap chopper, you must first define what "cheap" means to you.

1. Determine Your Expertise Level: Building a cheap chopper means that everything on the sled has to be done right the first time. Expenses of performing re-work due to errors during the build will ensure you run well over budget. For portions of the build which are not within your skills, select an affordably priced professional to do that part of the work for you. It pays off in the long run.

2. Plan Ahead: Do not go into building a cheap chopper half prepared. Do your planning up front. Determine what parts you will need, what the price ranges and options are for you to choose from. You do not have to order every part at once, but have a plan to stick to or you may find yourself attracted by impulse purchases which can run up the cost of your chopper build.

3. Build from the Ground Up: If you really want to keep things on the cheap side, choose parts separately instead of buying a rolling chassis. The more work that has been done for you, the more the build will cost. 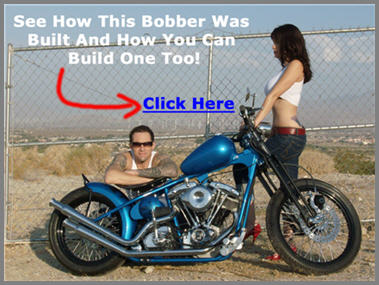 4. Recycle Parts: Consider using some used, but still good condition, parts in the build. For example, a frame doesn't show whether you bought it new or bought a used one after it is sanded down and custom painted. Tanks fall into the same category. In fact, you may have some parts in your garage or on an old bike you can recycle easily and save big on your cheap chopper build.

5. Read, Research, and Ask for Help: Most of the work required to build a cheap chopper is outlined in publications, videos, and you probably have friends who have taken on this challenge before you. Access these knowledge sources. You'll find a wealth of information, some even step-by-step complete with illustrations about building a cheap chopper. Don't fail to access every knowledge base you can find. Ask friends to give you tips on what to do and what to avoid. Often, you'll find your friends want to even help with the wrenching, too!

6. Don't Sacrifice Quality: When you have a choice between two parts, one costing a few dollars more but offering significantly better quality or options, do not scrimp. A cheap chopper that is built so cheaply that is doesn't hold up under hard road use is nothing to be proud of. Instead, choose parts and accessories based on a combination of price and quality. You'll find your dollars will go just as far while allowing you to build a cheap chopper that you can be proud to ride and show your buddies.

You can build a cheap chopper that will last you for years. Just remember to never sacrifice when safety is involved. Instead, drop a few of the flashy options and add those later on when your budget allows.