Rigid chopper frames least challenging type of motorcycle frame to build, (and maybe the most fun) because you don't have to worry about fabricating a swing arm for a softail. So building a rigid frame for a first time project might be a good idea. For an explanation of the difference between hardtail and softail frames read this.

A typical chopper chassis, whether it's a softail or a hardtail, are made up of several parts of DOM or ERW tubing (not pipe!): 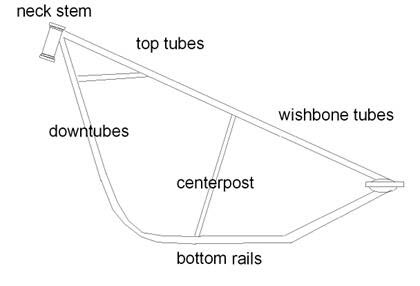 The reason it there is because it helps the frame achieve better rigidity. Many designers don't include one, but they make up for rigidity in other areas of the frame.

Here Is The Chopper Frame As Described Above (Note the shape of the wishbone. Also note that you can see where a builder will install the front end): 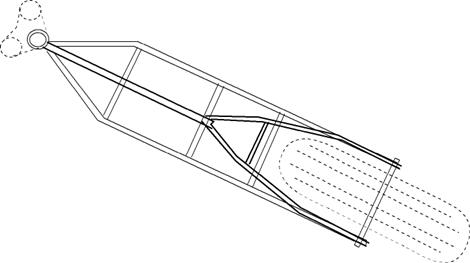 A Neck gusset is an important piece of metal that is welded to the neck gusset tubing, stem, backbone, and also the bottom rails of the frame. It improves the rigidity and provides support.

But many frames don't have a neck gusset. But support needs to come from somewhere so, for example, the builder might put 'struts' between the downtube and the neck stem.

Up to this point we have covered the most basic parts of chopper frames and how they are constructed. But we are just getting started.

You need to be able to install an engine on the chassis and to do this we need to weld on some mounts for the engine, and also the transmission, gas tank, and the rear fat tire (you should use at least 200 series rear wheel. 240's are popular. 300 and 330 are also very cool). 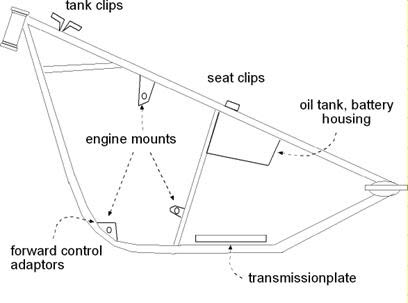 The Top Engine Mount is attached to the backbone. There are three in the diagram above (see dotted line pointing to each motor mount bracket). The other two are on the lower downtube and the seat post or center post. These are called Engine Mounts, and are usually thick plates. The engine 'sits' on the plates.

The engine is always bolted to the engine mount plates ot all three mounts.

You will attach your gas tank to where the clips are illustrated above which are located on the top side of the top tubes. The clips are simply there to let the tank rest upon on either end of the tank and are fabricated to do so.

What is usually used for mounting the gas tank is plate with holes drilled to accommodate the holes on the gas tank. You then fit the gas tank to the plate so that if you need to remove the gas tank you can do so simply by unbolting it from the mounted plate.

The Transmission mount is located as seen in the illustration. It's behind the seat post. It is also bolted on but the mount is welded on of course.

A Seat Clip is situated on the wishbone to accommodate the saddle of your choice. It is mounted in front of the seat post. This is not usually taken care of until later on in your build.

At this point you have learned all about how hardtail chopper frames are built. You can construct a softail using a swingarm. Also, you can buy weld on swing arms if you ever want to convert your rigid frame into a softail.

A swingarm houses the rear wheel and moves fairly independently of the rest of the frame in order to make the ride softer. It's the major component of your rear suspension.

A pivot axle is used to install a swing arm to a frame. In addition a system need to be installed to create that cushy feeling. The frame below has a shock absorber installed as an example: 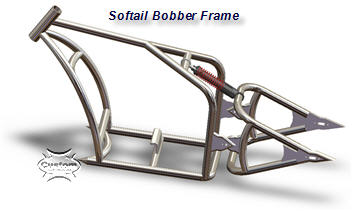