Our 12 page report called, Chopper Frame Alignment: How To Get Your Frame Straight, will show you how to get your frame aligned properly for your next chopper chassis fabrication project.

Here is the first page 2 pages (The images and text were formatted to fit this webpage. The actual report is more properly formatted):

Proper frame or chassis alignment is essential to the performance of a Chopper. There are several factors that can affect alignment.

Misalignment can occur during the assembly process due to an erroneous measurement of a frame component or a problem resulting from the welding process.

Misalignment can also be the result of a road hazard or accident. Regardless of the cause, there are times when alignment needs to be checked and possibly corrected.

Frame Alignment Figure 1 depicts a rear wheel misalignment with respect to the centerline. Misalignment, which encompasses a variety of issues, can cause multiple problems. Along with a wobbly and unstable ride, the tires, the belt or chain, and the sprockets will wear considerably and prematurely.

Wheel Alignment (and motorcycle frame alignment), as defined in its most basic form, deals with the front and rear wheels being in-line with the centerline of the chassis or frame of the bike. In other words, both wheels should point in the same direction.

Notice in Figure 1 that the rear wheel is out of alignment with the frame and the front wheel.

Either the frame is bent or the rear wheel axle is skewed. Frame alignment can also refer to the plane in which both wheels are positioned. If both wheels are not in the same vertical plane, this would also constitute an out-of-alignment condition.

Rake is usually the angle of the steering stem with respect to the vertical axis. The “normal” rake angle is generally between 24 to 35 degrees. However, on some Choppers, extreme rake angles range as high as 50 degrees. As a general rule, lower rake angles (no less than 20 degrees) mean better handling of the bike at lower speeds.

The greater the rake angle—the bike performs better at high speed cruising. But be forewarned – a high angle of rake really affects bike performance at lower speeds, such as in city traffic, parking lots and other areas of restricted space.

The high rake angle also creates a challenge when turning the bike around. It takes an extra six or more feet to turn the bike 180 degrees. Sprocket Alignment is defined similarly to Wheel Alignment, but deals with the rear wheel alignment and transmission.

Trail is the distance between two points, measured horizontally along the ground, where the front tire and the axis of rotation would contact the ground. (Refer to Motorcycle Frame Alignment Figure 2). 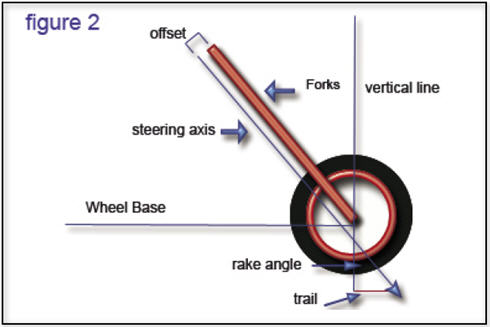 Offset is the perpendicular distance between an imaginary line drawn through the centers of the fork tubes and the steering stem of a triple tree-- the greater the offset, the less the trail and vice versa (Refer to Figure 2).

The following five motorcycle frame alignment issues can be corrected using the two options described below:

The first alignment method, referred to as the “String Method”, requires a brightly colored string or strong thread, a good quality machinist’s rule, and a jack. The cost of this method is merely the cost of the thread, rule, jack and any other materials such as blocks/boards—all items reasonably accessible.

The second method involves using an frame Alignment kit, which includes a scissors jack, a laser pointer, a front wheel restraint with reference markers, and a string marker. 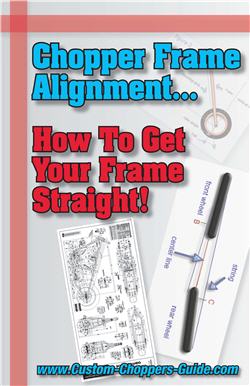 The rest of this information is in a professionally written and professionally formatted report called, "Chopper Frame Alignment: How To Get Your Frame Straight".

PS: Another option is to order our Build Your Own Bike DVD's (highly recommended), and it will be sent to you instantly after your order.

PPS: The other option is to order it as part of a bundled package of chopper building guides. When you order How To Build A Chopper Frame Vol. 1, and you'll be asked if you would like a special bundle offer which includes this as well as several other very helpful guides at a deep discount.