What Are Hardtail Choppers Exactly? 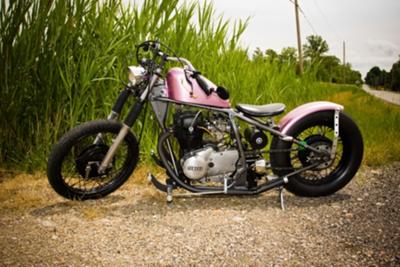 Choppers are customized to suit the personality of the owner, and it must live up to certain expectations of the owner.

One particular fascination that is common to most chopper riders is a low seat position. In their effort to achieve this they chop off the rear suspension (for some, the height of seat has become an obsession and they will go to any length to achieve the lowest possible seat height).

The rear suspension becomes the first victim. After taking the rear suspension out the rider literally sits on the fender without any kind of shock-absorber. This is why this kind of chopper is called a Hard tail chopper.

Side Bar: The picture above is a hardtail bobber built by one of our subscribers.﻿

The doing away of the rear suspension for achieving a very low seating position has quite a few implications.

The low seating position enhances the look, no doubt about it. Secondly, the fender is so near the rear tire that the inner side of the rim can be seen only.

It adds a bit of sleek and suave look to the otherwise loud and bulky chopper.

There remains very little space between the rear tire and the fender. Though hardtail choppers look hot, it has its own flip side also.

So beware of the complications before you do away with those rear suspensions.

Feel The Road With Your Hardtail

Without the rear suspension the Hardtail chopper becomes unsuitable for riding on inhospitable terrain. If the road is silky smooth and you know it the way you know the back of your hand, then riding a Hardtail chopper is a fine proposition.

One can, however, be assured of the fact that a rider on a Hardtail chopper will feel the road. Every small pebble that will come under the wheel will jerk the chopper.

Even the very thin line that is left after the road has been repaired will   be felt. The less we talk about the potholes the better, for you will suffer nothing short of a violent jolt that will turn your stomach and can even hurt your back.

There are also a few other things that should be straightened out before attempting to ride a hard tail chopper.

Hardtail chopper, the question of control

Although the low sitting position enhances the equilibrium of the chopper, the non- existent rear suspension makes it very difficult for the rider to control the Hardtail chopper even at a medium speed. Even at a rather medium speed the wheel gets off the ground on the slightest of bumps like a small stone. This behavior of the chopper can be life-threatening to the rider.

In a freeway at a high speed it will become very hazardous for the rider if the rear wheel jumps off the ground. Hardtail choppers have very little traction on the rear wheel so the rider will have to be extra cautious while negotiating a bend or a corner.

Though it may sound weird carrying a passenger, it can improve control, as an additional weight will increase traction.

A little less air on the rear tire will make it act like a shock- absorber  but it will also brush the fender, as there is very little space between the two.

A Hardtail chopper rider must be conscious of all things while enjoying a ride. But then there are those hardcore hardtail enthusiasts who claim that it's not chopper unless it's a hardtail, and your not a real man (or woman) if you ride anything 'less'.

Just be rational about your requirements, and if a hardtail is right for you, go for it. That's all we ask :-)